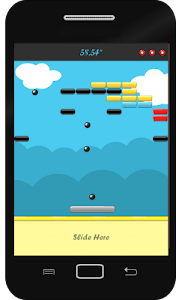 The player moves from right to left a horizontal bar supposed torepresent a spaceship. This tray positioned at the bottom of thescreen allows you to bounce a ball that will destroy the blocks atthe top of the screen. The player goes to the next level when allblocks are destroyed (except some indestructible blocks); theplayer loses a life each time he let slip the ball to the bottom ofthe screen.

Archanoid demolition is the version for your Android device tothe famous Arkanoid game or how popular BreakOut were in the 80sand 90s.
Destroy all the bricks to advance the phase and enjoy spectacularvisual effects.
Archanoid consists of 100 levels. You will have nine assists orcompletely different bonuses help you fill them:

Bricks Smash Breaker menu
- Extra Ball
- Barrera
- Multiplying Balls
- Changes in the size of the racket
- Variations in the speed of the balls
- Fireballs
- Snowshoeing magnetized
- Extra points
- Laser
Apart from this unique you are and your ability.

Photo Editor Pro Effects 1.1.0 APK
TerryDev
1
Photo Editor Pro Effects is a powerful photoeditor with many amazing effects and filtersA very comprehensive photo editor and pretty much everything youcould ever want to do on your phone!There are so many effects, stickers and features to apply to yourphotos,Photo Editor Pro Effects will give you the look you want inseconds.Photo Editor Pro Effects is a fun and powerful photo editor thatlets you quickly be pro, even if you’ve never edited a photobeforeKey Features:- Tools Crop, rotate, saturation, flip, contrast, brightness etcSet your photo as wallpaper.- One-tap auto enhance- Photo filters- Crop, rotate, and straighten your photo- Adjust brightness, contrast, color temperature, andsaturation- Sharpen and blur- Gorgeous photo effects and frames- Fun stickers- Color balance- Color temperature ("Warmth")- Color Splash- Focus (Tilt Shift)- Draw and add text- Create your own memes- Share to social networkNote: the edited image is saved in "Album/Picture" or "FileManager/DCIM/Camera" or “Gallery/Picture"******(IT'S TOTALLY FREE!)******So what are you waiting?
1

Pirates Ship Bubble Shooter 1.0 APK
TerryDev
1
This is the classic and amazing shootingbubble game.Make combinations of 3 or more bubbles to make them burst. Clearall the bubbles to level up.How to play - Just tap and kick the balls if you are best kicker.Tired of traditional bubble bobble?Now, new mode is coming ! Rocking screen ! rotating puzzle-Epic and beautiful game scenes-New game mode : Fighting boss, rotating rudder, Movingscreen.-Nearly 101 levels of Challenging puzzles!-.Exciting and crazy obstacles- .Beautiful animation effects- Vivid soundtrack and musickick the bubbles and be the best kickerEnjoy with Our kicker Game.
1

My Phone Alarm 3.0 APK
TerryDev
1
This great app was created to protect yourdevice from illegal use by third parties or on you are working.This app could be helpful In several cases:Know if your friends ever touch your phone without your permission!Motion Detector Alarm Emits a LOUD attention when phone istouched/moved.This app is great to make sure nobody touched your phone when youare awayHow My Phone Alarm application work:Click the Start button on MY PHONE ALARM, then you can decidethe time to operate. You can set the alarm time off after phone ismoved. So do not harm others.Phone is moved, the alarm will soundThe status bar icon support. Direct access to the application areavailable.You can change the attention tone.Friend's take device without permission ?you want to leave device in public place?you have stealth wife/husband want to check your device for somereason and don't be beware ?Simply activate the Anti theftDon't worry with this stealth, you have the best applicationBest application Security For Your mobile droid or TabletUse app on your Android Device when in public or also to catchthose sneaky friends and family who trying to peek into your droidwhen you're away.What really happens when you're in the shower, sleeping, or justaway from your device. Use this high quality app to trigger ansecurity
1

Hunter Jungle Ducks 2.0 APK
TerryDev
1
Revolution hunt is beginning are you ready ?It is simple and enjoyable. Your job is to shoot plenty ducks asmuch as possible.Be the duck with the crew hunter !!!your fantasy place is here. you can achieve here what you cannot in your real life,hunt plenty ducks in pumpkin jungle. You have the best sniperShooting gun, Enter the jungle with the crew for hunt ducks, thewild animals you have dreamed of,you have wished and imagined. In this dangerous pumpkin forest,take the aim and shoot right at the head.Get the winning trophy of animal head, and brag about.revolution sniper shooting games, but this game is unique in thesense that it provided you all in one.this forest gives you all, and invites you to take the challenge ifyou can. Test your sniper shooting skills, your jungle survivalskills,your temperament.★★★ STORY ★★★You love to hunt revolution, and are entered in this dangerouspumpkin jungle with your best sniper shooting gun. Fast ducks andplenty are out there, take the aim and shoot, never ending fun ishere.Features:★Unlimited ammo★Precision rifles★Simple controls★Massive armoryNow, you are ready. Start it now!
1
Loading...
Loading...

Bricks vs Balls APK
1
Break bricks in this exciting new version of the classic64 Levelsof action split over 8 worlds with more to come in future updates,break bricks to clear each level and progress, catch stars tounlock new worlds.Many different types of power ups to assist orhinder your progress such as:⦁ Bat Expander: Expands your paddle todouble the size making it easier to hit the crazy balls.⦁ StickyBat: Causes the balls to stick to the paddle so it can be releasedin any location.⦁ Fireball: The balls will burn through brickswithout bouncing, making clearing levels much quicker.⦁ Fast ball:Speeds up the balls making it harder to react.⦁ Lasers: Gives thepaddle lasers allowing it to destroy bricks without using the ballsfor a short timeAnd More!Highlight Features:⦁ High HD graphicdesign.⦁ 64 Levels of action⦁ Easy access controlsIf you like themost classic addictive games that never really end,then “Bricks vs Balls” is a great option.If you enjoy puzzlersand want a game to occupy your brain without consuming you, then“Bricks vs Balls” is a decent option.Play and Enjoy it anywhere:“Bricks vs Balls” is Free does not require any Internetconnection.You can enjoy it while traveling in a real airplane ortrain, also in the subway, or in your car on the road, or whilerunning.Age rating:“Bricks vs Balls” It’s accessible for prettymuch any age or skill level, and as it’s a fairly universal conceptfor a puzzler, there’s no barrier for entryLightweight “Bricks vsBalls” doesn’t consume data from your devices and it’s compatiblewith all phone and tablet sizes.
1

Minecraft 1.16.10.02 APK
Mojang
1
Explore infinite worlds and build everything from the simplest ofhomes to the grandest of castles. Play in creative mode withunlimited resources or mine deep into the world in survival mode,crafting weapons and armor to fend off dangerous mobs. Create,explore and survive alone or with friends on mobile devices orWindows 10. EXPAND YOUR GAME: Marketplace - Discover the latestcommunity creations in the marketplace! Get unique maps, skins, andtexture packs from your favorite creators. Slash commands - Tweakhow the game plays: you can give items away, summon mobs, changethe time of day, and more. Add-Ons - Customize your experience evenfurther with free Add-Ons! If you're more tech-inclined, you canmodify data-driven behaviors in the game to create new resourcepacks. MULTIPLAYER Realms - Play with up to 10 friendscross-platform, anytime, anywhere on Realms, your own privateserver that we host for you. Try a free 30-day trial in-app.Multiplayer - Play with up to 4 friends with a free Xbox Liveaccount online. Servers - Join free massive multiplayer servers andplay with thousands of others! Discover gigantic community-runworlds, compete in unique mini-games and socialize in lobbies fullof new friends! SUPPORT: https:///www.minecraft.net/help LEARNMORE: https:///www.minecraft.net/
1

Piano Tiles 2™ 3.1.0.1132 APK
Cheetah Games
1
Top 3 of free music games in the world! Loved by 1.1 billionplayers in the world, combining rhythm and music, a challengingfree music mobile game! Game feature: 1. Simple graphics, easy toplay and everybody gets playing the piano! 2. Breath-taking rhythmwill challenge your handspeed limit! 3. Top challenge mode givesyou thrill and risk! 4. Update of numerous songs, original,classic, bangs and all the style to satisfy different taste. 5.Share your record with your friends, and compare with world-wideplayers on the ranking list! 6. Sound of high quality makes youfeel like in a concert. 7. Save your progress via Facebook accountand share the progress in different devices. 8. More challenge,more bonus and a better self. Gaming mode: Don't tap the whitetiles! Tap the black tiles according to the melody and don't missany tile! Concentrate yourself and maximize your reaction! Support:Are you having problems? Send email to gpfeedbackpt2@gmail.com orcontact us in game by going to Settings > FAQ and Support.Business Cooperation: Cheetah Mobile is now sincerely inviting allthe amazing mobile game developers globally to achieve mutualsuccess! we are looking forward to the great games! Contact us on:cheetahgames@cmcm.com Privacy Policy:http://www.cmcm.com/protocol/site/privacy.html TOS Privacy:http://www.cmcm.com/protocol/site/tos.html Ad Choice:http://www.cmcm.com/protocol/site/ad-choice.html
1