Thank you for using Apk-Dl.com to download the apk file (Idle Champions of the Forgotten Realms_Latest Version.apk), 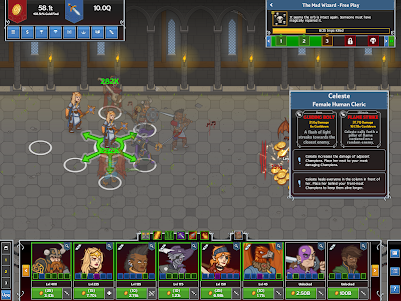 Idle Champions of the Forgotten Realms is an official Dungeons& Dragons idle strategy management game. Idle Championschallenges players to assemble a party of Champions and master theart of Formation Strategy. Players unlock new heroes, upgrade themto reveal special abilities, and collect epic gear. The key toglory is learning how to combine Champion abilities to defeat anonslaught of powerful monsters. Key Features: Unlock RenownedChampions Collect renowned Champions from the world of Dungeons& Dragons, including fan-favourites from the Force Grey series.Unlock more Champions and gear to add to your party in limited-timeevents. Formation Strategy Mastering the position of each Championto maximize their special abilities is the key to completing eachadventure. Each Champion's abilities and gear requires carefulthought to create the best combination. Only the most powerfulformations will defeat the waves of Dungeons & Dragonsmonsters. Explore the Forgotten Realms Take your Champions on ajourney through the Sword Coast. Players will be able to explorefamiliar locations within the Forgotten Realms as they tackle eachadventure. After launch, the game will be updated with contentinspired by the official Dungeons & Dragons adventures,starting with a trip to Chult with the Tomb of Annihilation.Regular Events The game is updated regularly with limited-timeevents. Completing events unlocks new Champions and gear to add tothe player's collection. Note for phone users: This game isintended for tablet-sized screens. Due to recent changes in howsome larger phones identify themselves we've opened it up to morephones. You may have some challenges navigating the game onsmaller-sized screens. Please keep that in mind. We suggest playingthe game on a tablet! A Note About Premium Purchases: - You candownload and play Idle Champions of the Forgotten Realms for free,however some premium in-game items can also be purchased for realmoney. - Gems earned for free in-game by killing bosses andcompleting adventures can be redeemed in the in-game Shop forSilver and Gold Chests that contain equipment, potions, contracts,and gold. Gold Chests can be purchased for real money if you do notwant to wait and save up gems for them. - Silver Chests containthree cards of Common to Rare rarity. Silver Chests have a chanceof dropping Rare equipment cards, but do not contain Epic equipmentcards.* - Gold Chests contain five cards of Uncommon to Epicrarity. Gold Chests always contain at least one Rare equipment cardand have a chance of dropping Epic equipment cards.** - BasicSilver and Gold Chests can drop equipment for all basic non-eventChampions, including Hitch and Drizzt. They will not drop equipmentfor event Champions (for example Gromma, Krond, or Barrowin). -Event and Promo Chests function the same as basic Silver and GoldChests, however, they only drop equipment cards for specificChampions. Check the description in the in-game Shop to determinewhose items they can drop. - Guaranteed “Shiny” equipment cards areavailable as a reward for real money purchases, however, they alsohave a small chance of appearing in any Silver Chests or GoldChests that you purchase for free.*** - Bonus “Golden Epic”equipment cards are generally only available as a purchase bonusfor real money transactions, however, specific Golden Epic cardsmay become available through free means at Codename Entertainment'sdiscretion. - In-game purchases range from $2.99–$59.99 USD (orequivalent local currency) per item. * Chance of a Rare equipmentcard in a Silver Chest is approximately 3.2%. ** Chance of a Rareequipment card in a Gold Chest is 100%. Chance of an Epic equipmentcard in a Gold Chest is approximately 12%. To mitigate bad luck, asystem exists to guarantee at least one Epic equipment card withinevery 10 Gold Chests. *** Chance of a Shiny equipment card in aSilver or Gold Chest is approximately 0.1% per chest.