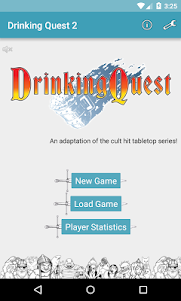 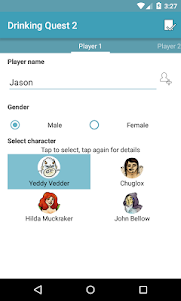 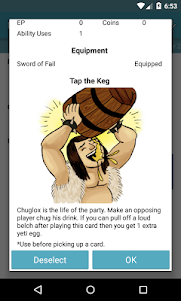 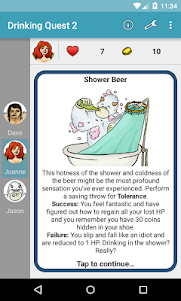 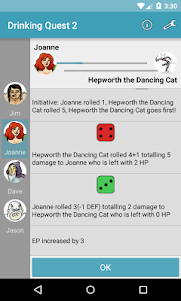 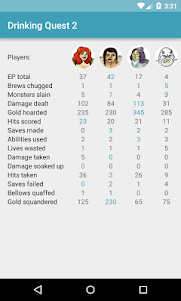 The adaptation of the cult series is here and ready to bring toapub!

The physical Drinking Quest games retail for $25 (Or $50forTrilogy Edition which contains all three games) but thisphoneadaptation is only $5 and has many new features like savingyourplay statistics and being able to play a game just by passingaphone around. Plus there's a new chiptunes soundtrack and afewother fun bonuses.

Den of the Cat People: Are they cats? Are they people? Aretheyboth? Why do some of them wear business suits? This quest haslotsof cat puns and satire about consumerist culture!

City of Cheer: The City of Cheer used to be really livelyandupbeat but in recent years a wave of DEPRESSION has washed overthecity. This quest is sure to cheer you up if you're feelingblue.Plus it has the son of the guy named Chad from the firstgame.

Leprechaun Party: They're tiny! They're green! They drinklikeogres ten times their size! Get out your Pepper Spray Wandtohandle the rioting leprechaun hordes!

Minotaur's Maze Tavern: This quest is kind of menacingbuthonestly they haven't even put up all the dry-wall in themazeyet... moments of TERROR mixed with uncomfortable reminders ofhowboring your day to day life is. Also with an end boss that hasaPERSONAL CONNECTION to one of the main characters.

THIS GAME IS 2 - 4 PLAYERS because we don't support oneplayerdrinking games.

"If you'd like to get with your RPG-loving friends and spendsometime getting a little bit sauced, you could certainly do worsethaneither Drinking Quest [The Original Drinking RPG] or itssequel,Drinking Quest 2: Yeddy Vedder’s Yeti Adventure."

"Drinking Quest may be the best thing to happen totabletopever!"

"DQ is like taking a liter of Jack, a deck of cards, a penandpaper RPG, some dice, with a Jameson chaser and hittingblend."

"For all of its silliness, it holds a solid senseofrefinement."

"This game appeals to my love of tabletop games, nerdculture,and my rampant alcoholism."

— Troll in the Corner