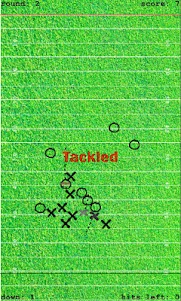 Command your football teams offense in this fast-paced arcade stylefootball game. Use your fingers to direct the paths of yourplayers. Pass the football using multi-touch. Score as manytouchdowns as you can before you are overwhelmed by the aggressivedefense.This the full version of Phil's Football. It includes aturbo mode, which is a fast paced version of the regular game. Italso includes a two player mode which allows you to play againstanother person sitting next to you, offense vs. defense. To play:You are the offensive O's. Draw paths for your players using yourfinger. Your goal is to reach the touchdown and score as manytouchdowns as possible. The game will get faster and morechallenging with each touchdown scored. To pass the ball, yourcurrent ball carrier (quarterback) must be behind the currentyardline. Put one finger on your quarterback and tap the player topass it it to with another finger (while still holding the firstfinger down). Avoid any defensive X's as they will block the ballin flight. Or you can just run the ball forward. To pause, justdouble tap anywhere on the field that is not a player. -- UPDATES--Thanks for the continued feedback and feature requests. We fixedsome issues and bugs with gameplay.Fixed issues with various screenresolutions.Added a new stiff arm feature. Tap an incoming defenseman quickly before your quarterback is tackled to perform a stiffarm. This will give you a bit more time to score.Added a two playermode. This will allow you to play a turn by turn game against yourfriend, in person. Made the defensemen a little moreintelligent.Added a new dual mode throw feature, which will allowthe quarterback to throw bullets, or slower lobs. The advantage ofthe lob is that the defense will only be able to block it if theyare very close to your receiver. Enjoy!