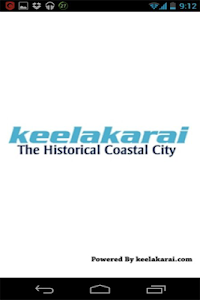 Your favourite city had waited long enoughtoget the ONE STOP Killer App.

Villages nearer to keelakarai are mayakulam, chinnaMayakulam,Periya Mayakulam,kanchinakudi and Thirupullani.Keelakarai has agood beach where people can flock together and havefun at theevening with their family members and friends. Fishermenareharvesting the fishes from the sea for the daily needs ofthekeelakarai citizens and also for the near by people.

The climate of Keelakarai is usually hot and dry. A shortrainyseason exists but the weather is for the most part hotandhumid.

For any support queries, please feel free to write to usatkeelakaraidotcom@gmail.com

IBM Verse APK
IBM Collaboration Solutions
1
****IBM Notes Traveler is now IBM Verse! You're ready for the future.IBM Verse replaces Notes Traveler and will continue to work withyour existing Traveler servers.****Get ready for mail that understands you, for less clutter and moreclarity, for connecting you to the people who matter to you most.Cloud-enabled, designed for mobile devices, and powered by IBM'sanalytics and advanced search, IBM Verse works for you, not theother way around.With IBM Verse for Android devices, you can:•See mail from people important to you•Set people you interact with often as Important•Mark mail as Needs Action•Manage items that need follow up•Track who owes you a response and when•Work with your calendar seamlessly•Interact with all of your contactsThis app is compatible with IBM Traveler server version 8.5.3.3 andlater fixpacks, as well as 8.5.3 Upgrade Pack 1, 8.5.3 Upgrade Pack2, and 9.x. To get started, contact your administrator for youraccount and company configuration information.If you're interested in using this application with IBM SmartCloud,see this URL http://www.ibm.com/cloud-computing/social/us/en/ forfurther information.If you do not have IBM Traveler deployed in your company, but wantto try it out for free, register an account on IBM Greenhouse, afree IBM product trial site: http://greenhouse.lotus.com, thenfollow the instructions to configure your IBM Traveler account:https://greenhouse.lotus.com/wpsgh/wcm/connect/ghcontent/lotus+greenhouse+next+site/home/products/ibm+notes+traveler.It is that simple to get started!If you are an end user and experiencing a problem, please contactyour company IT help desk. If you are an IBM Traveler administratorexperiencing a problem, please open a PMR with your IBM customernumber. In addition to rating the app, you can tell us what we havedone right or what we can do better by emailing IBM mobile softwareengineering directly at heyibm@us.ibm.com.For more information about IBM Verse go to the official productwebsite:http://www.ibm.com/social-business/us/en/newway/
1

DMCA 1.3 APK
Dubai Maritime City Authority
1
Dubai Maritime City Authority Application DMCAFounded in 2007, Dubai Maritime City Authority (DMCA) hasbrought about a radical change in the local maritime sector throughan extensive range of industry initiatives and regulations whichsupport its ambitious approach to creating a safe investmentenvironment for industry leaders from all over the world, whilereaffirming Dubai’s position as a first-class internationalmaritime hub. Established to monitor, develop and promote maritimeactivities, DMCA provides a platform of excellence and quality asit develops world-class regulations and guidelines to raise the baron the maritime industry and boost its infrastructure, operationsand logistics services while offering investment opportunities toboost Dubai’s competitiveness at the regional and internationallevels.DMCA aims to build effective and strategic partnerships withrelevant government agencies, private businesses and stakeholdersin line with its vision to create a safe and vibrant maritimesector and therefore drive economic sustainability and growth inthe emirate. The Authority is keen on expanding its scope of workand laying down effective policies under the highest standards ofmaritime safety and best environmental practices, in adherence withthe local and international laws to develop a safe maritimeenvironment for maritime operations and businesses.
1

Package Disabler Pro (All Android) 10.8 APK
policedeveloper
1
It may not work on Android 7 devices thathas new samsung update. You will need to make package disabler aowner APP in that caseORIGINAL PACKAGE DISABLER PRO ( CHECK no. of DOWNLOADS) - NOROOT REQUIRED**Supports rooted devices and all Android 5.0 + devices that hasenabled owner app functionality for package disabler procheck how to make owner APP :http://www.packagedisabler.com/owner-app/PDP plugin app is required for samsung devices.This app uses theDevice Administrator permission.5 Day refund means , if the app does not meet your expectation, youcan send us your google invoice within 5 days to get refund within24 hours.Thanks to all our supporters who help develop this amazing APP .Buying Original software helps the entire ecosystem. This willencourage developers to bring new innovative products. Packagedisabler with over 500000 downloads and 2 years of existence is aguarantee in itself.Package Disabler Pro lets you identify and disable allunwanted packages/apps that come pre-installed with your phone. Wehave one click option to disable all BLOATWARES. Disabledapplication / package will not be updated using google play or anyother means. So this app can be used for blocking apps (e.g.Parental Controls) or business use cases, you could even disablegoogle play store etc… without rooting the phone. This app alsoprovides password / uninstall protection to avoid misuse.Package Disabler provides an export/ import functionality tobackup all disabled packages on your external storage which you canrestore at any time.USES– Every mobile user use wants to improve the performance of theirmobile device can use Package Disabler– Businesses who want to control the APPS on the Employees devicescan benefit from Package Disabler– Parents use Package Disabler to control application used byKIDS– Package Disabler is used in trade shows to clean up the launcherscreen when used for demonstrationsRemember, though: ALWAYS have a backup of your phone. Importantfeatures might break when disabling system apps.KEY FEATURES:* Disabling and enabling any packages /apps* Package Disabler Helps to Identify 100+ Bloatware's on most ofSamsung Handsets. New bloatware list for other android devices willbe available soon* One click bloatware removal to quickly improve device perfomanceand save battery* Export your disabled list to the external storage to import themlater* Batch operation to enable all disabled packages* Filter to show all disabled packages* Password protection* Filter to show all installed apps* Filter to show all system packages* Quickly find apps using the search functionality* Use Google cardboard APPS on Gear VR ( disable packagecom.samsung.android.hmt.vrsvc )Notes* If you have issues uninstalling apps, try Settings –> Security–> Device administrators, uncheck "package disableradmin".* Be aware that in order to update your version of Android, youmight need all original apps in place. It is advised to always havea backup of disabled packages so you can restore them later.Disclaimer* We cannot be held responsible for any damage you may cause bydisabling packages that are not bloatwares* Removing critical packages can cause your phone tomalfunction.* Always have backups of your device.* If you have any questions regarding using Package Disabler,you're advised to contact packagedisabler@gmail.com.If you have any other suggestions, questions or issues, feel freeto contact us and I'll do my best to respond asap. Please don't usereviews for complaints as we will be unable to respond to yourissue.NOTE: owner APP is removed only by factory resetif you need any customizations to package disabler / consultancy orany comments/ feedback please contactpackagedisabler@gmail.com
1

Uber Driver 4.282.10001 APK
Uber Technologies, Inc.
1
UBER DRIVER - THE APP FOR DRIVERS- Help people move around your city, and make money on yourschedule. Drive whenever you want—Uber offers a flexible way tomake extra cash on your terms. No offices, no bosses.- Download the Uber Driver app, and sign up to drive in the app.We’ll guide you through the steps and notify you when you’re allset to drive.HITTING THE ROAD- The app offers the latest features that help you focus on drivingand making money.- We’ll explain how to use the app, provide optional navigation andHelp support, and let you know when there are special opportunitiesto make even more. Every trip you take is fully tracked by GPS forsafety and security.GETTING PAID- You can see how much you’ve made anytime after every trip. You’llbe paid directly to your bank account every week, or receive cashon each trip—depending on the country you drive in.*This app typically uses 2 GB of data per month. Using navigationcan decrease your phone’s battery life.
1

Vault-Hide SMS,Pics & Videos,App Lock,Cloud backup APK
NQ Mobile Security (NYSE:NQ)
1
Vault is a mobile app designed to hideprivate pictures, videos, sms, call logs and contacts on yourphone. Currently there are more than 100 million users worldwideusing Vault to protect their mobile privacy while enjoying AppLock, Private Bookmark, Incognito Browser, Cloud Backup and manyother helpful features for completely free! Join themnow!Top Features☆ Hide and Protect Photos & videos: Photos and videosimported into phone can only be viewed or played after the correctpassword is entered. These photos and videos can also be backed upto Cloud Space for better protection.☆ Hide and Protect SMS: You can easily hide your SMS andread, back up or restore them anytime you want.☆ Contacts/Call logs Protection: Set your contacts asprivate and all call logs and SMS with them will be hidden.☆ App Lock (Privacy Protection): Use App Lock to protectyour social, photo, call logs and telephone apps to prevent privacyleak.☆ Private Browser: With Private browser, your internet surfwill leave no traces behind. There is also Private Bookmarkfeature.☆ Cloud Backup: Back up your SMS, contacts and call logs,photos and videos to Cloud so they never get lost.☆ Data Transfer:With Cloud Backup feature, you can easilytransfer your data to a new phone.☆ Password recovery: Worried about forgetting your password?Set a security email in Vault so you can retrieve it.Advanced Features► Multiple Vault & Fake VaultCreate multiple vaults with different passwords for storing photos,videos or private contacts respectively. And one of them can be afake vault.► Stealth ModeMake Vault icon disappear from your home screen and it can only befound again with the correct password, so no one knows itexists.► Break-in AlertsSecretly snaps a picture of any one who attempts to access with awrong password. Vault captures a photo, the time stamp and PIN codeentered by all intruders.Support:► Q&A:1. What if I forgot my password?If you have a security Email set up before, you should be able tosee a "Forgot Password" en-trance once you input the wrongpassword. Tap on the entrance and follow the instructions to resetyour password.If you do not have a security Email but you had backed up your datato cloud space, then the data can be recovered from the cloud byreinstalling Vault app.2. How do I enter vault in stealth mode？In stealth mode, you can enter Vault by opening the phone's dialpad, inputting "##your Vault password" (for example, input ##123 ifyour password is "123" ), then clicking Send (or Call)button.If Vault is currently not running in the background (when it hasbeen force stopped by Android system or another app), ##Passwordwill not work. Now you can:1. Put Vault back to the phone’s home screen by adding Vaultwidget, once it appears on home screen, tap on it, and then inputyour password to enter, or,2. Download "NQ calculator" in Google Play, open it, and inputcorrect password then tap "=".3. Why are my photos/videos lost?Some cleaning or free storage apps may automatically delete Vault’sdata folder used to store pictures and videos. So, as a bestpractice, please do not choose to delete Vault’s data folder andsubfolders (mnt/sdcard/SystemAndroid) when you use such apps.You can also backup your sms, pictures and videos to cloud by using"Cloud Backup" feature in the premium page of Vault.After the backup, you won’t have to worry about accidentallydeleting stored pic-tures/videos/sms or other data, and you canalways restore data from the cloud whenever you need.For more questions or comments,Email: vault@nq.com► Facebook Page & Messager:Vault – hide pics&videos, sms, lock app @nqvaultapp► Google Plus Community:https://plus.google.com/u/0/communities/110976569568741381790
1