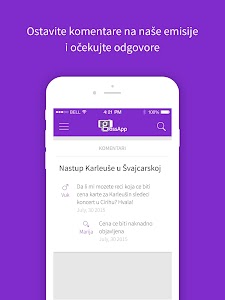 GossApp is auniqueapplication in our region that offers direct communicationbetweenthe user of the largest regional stars. In addition to thecourseof the overall emissions corresponds to the mostintimatequestions, gossip and challenges that you yourself set up,GossAppa unique base most private mobile recordings ofeminentpersonalities from dealers of all spheres of public life.

Quick and easy download of the application, create a nickname(ortype in the full name) under which you will be active andminglewith the stars, or just to watch the actual emissions -TOTALLYFREE!

Also, if you are unable to your favorite singer or singerfollowthe mega concerts throughout the region and the DiasporathanksGossApp-in you will be in the most prestigious clubs -completelyfree! You can watch raw, unedited footage from theconcerts that Inoted the singer, and read everything you want on agiven nightclubs, club or book a desired location.

Also, every week, you can expect even the top ten lastweek'sperformance, recorded private mobile phone star, or tenshotsannouncing concerts and tours in selected and best discos, notonlyin Europe but also in America and Australia!

Matt Goss APK
1
Download the new Matt Goss Mobile App to stay connected and receiveexclusive communications, offers and opportunities to interact withMatt Goss right to your mobile phone.Life You Imagine, Matt Goss’shighly anticipated solo album, is the classy, swinging sound ofambition, passion, and the realisation of 27 years’ experience inthe music industry. If Goss’s pop career hit an early peak with “IOwe You Nothing” and “When Will I Be Famous”, the classic Eightieshits he enjoyed with Bros when he was just 17, it reaches animpressive new high with this brand new solo album – a projectsprung into life by the singer and showman’s long-running,hot-ticket, weekly residency in Las Vegas.“I wanted to write anuplifting album about the Vegas experience and feeling like a man,”says Goss with the insight born of an illustrious and varied career– and of being through the emotional mill. “You find your groove,and it feels good. I wanted it to reflect how I am now, and howI’ve been over the last four years, and what it’s like when youcome through a big relationship.”And it’s harder because Goss has alot to say. He admits with a laugh that he and legendary producerRon Fair (Christina Aguilera, The Black Eyed Peas) “butted heads alot” during the recording of Life You Imagine. “We’re both verymeticulous, and we did push each other – but in the best ways.” Hisambition – to honour the spirit of the musical icons he adores,from Presley and Sinatra to The Police and Amy Winehouse – wouldrequire a lot of hard work.“This is about as authentic as it gets,”he says proudly of an album, – proudly retro yet also smartlyprogressive – that features a 16-piece brass section and 32 strings“and a world-class band… I just had to throw everything I couldemotionally and creatively at this record. And luckily Ron is alunatic as well, in the best way. He calls it the album of hislife.”Luckily, blessed with the musical chops honed by a rigorouslyweekly Las Vegas performing schedule, Goss was more than up to thetask. A cornerstone song was one he wrote early on, and indeed wasthe number he took to Ron Fair first. The cool, sassy “Mustang”,the emphatic album opener that showcases Goss’s seeminglyeffortless croon, is a song about the importance of freedom withinlove.“When you love somebody you have to let them be as free asthey can be; you have to have the courage to let them shine asbrightly as they can be. So the image of the wild mustang is love,running and running and running – and if you set it free it’ll comeback to you. That’s what I want in my life.”This passion wasapparent early on, even in the song’s most basic form. “Ron heardmy first sketches for these songs and said to me, ‘I want to buildskyscrapers on these demos.’ And that’s what we did over two years.I can’t even explain how long those two years were,” he reflectswith rueful chuckle, “just chipping away every day at thesongs.”Rippling piano, brass and strings belter Strong is anotherdeeply emotive song. “The most relevant line is, ‘I felt shame’.Most songs about strength don’t consider the idiosyncracies and thefailings within you that you want to improve. I acknowledge myweakness as well as my strength. The pre-chorus is inspired byElvis – ‘I’ve been lost, found, I fell upon a higherground…’”“Lovely Las Vegas” is another inspired homage, this timeto the city where this proud Londoner now spends a huge chunk ofhis professional life. Like his Sin City show, it was inspired byhis childhood love of the Rat Pack, their style and their films andtheir music. He recalls sitting at his piano through the night,knowing that the inspiration would strike. Finally, as dawn wasbreaking, the song came to him. And already the mettle of thisbrand new yet vintage feeling song has been recognised: it’s nowplayed in the arrivals hall at Las Vegas’s McCarran Airport,arranAirport,
1

Stick Nodes Pro - Stickfigure Animator 3.1.8 APK
ForTheLoss Games
1
Stick Nodes is a powerful stickman animator app created with mobiledevices in mind! Inspired from the stickfigure animation community,Stick Nodes allows users to create their own stickfigure-basedanimations and even export them as animated GIFs and MP4 videos!Stick Nodes is one of the most popular animation apps for younganimators! This is the PRO VERSION of Stick Nodes. Extra Profeatures include: ◆ No startup ad ◆ No watermark on exports ◆ Addsound effects to frames ◆ Export to MP4 video (not just GIF) ◆ Morestickfigure filters (blur, glow, and more) Features ◆ Automaticcustomizeable frame-tweening, make your animations smoother ◆ Asimple camera to pan/zoom/rotate around the scene, similar to the"v-cam" in Flash. ◆ Movieclips allow you to create and reuse/loopanimation objects within your projects. ◆ A variety of shapes,color/scale on a per-segment basis, gradients - create any"stickfigure" you can imagine! ◆ Textfields allow for easy text andspeech in your animations. ◆ Add all kinds of sounds effects tomake your animations epic. ◆ Apply different filters to yourstickfigures - transparency, blur, glow, and more. ◆ Joinstickfigures together to easily simulate holding/wearing objects. ◆A large community full of all kinds of interesting people and otheranimators. ◆ Over 30,000+ stickfigures (and counting) to downloadfrom the website. ◆ Export to GIF (or MP4 for Pro) to share youranimation online. ◆ Compatibility with pre-3.0 Pivot stickfigurefiles. ◆ Save/open/share your projects, stickfigures, andmovieclips. ◆ And all the other typical animation stuff -undo/redo, onion-skin, background images, and more! * Please note,sounds, filters, and MP4-export are Pro-only features Lanuages ◆English ◆ Español ◆ Français ◆ Japanese ◆ Filipino ◆ Português ◆Russian ◆ Türkçe Stick Nodes has a thriving community whereanimators have a good time, help each other out, show off theirwork, and even create stickfigures for others to use! There arethousands of stickfigures (and more added daily!) over at the mainwebsite http://sticknodes.com/stickfigures/ Search for "sticknodes" on YouTube to see just a few of the thousands of animationsusers have made with this stickfigure animation app! If you'relooking for an animation creator or an animation maker app, this isit! Stay Updated New updates have been never-ending for Stick Nodessince it's original 2014 release. Keep up-to-date with the latestnews and updates about your favorite stick figure animation app andjoin in with the community! ◆ Website: http://sticknodes.com ◆Facebook: http://facebook.com/sticknodes ◆ Reddit:http://reddit.com/r/sticknodes ◆ Twitter:http://twitter.com/FTLRalph ◆ Youtube: http://youtube.com/FTLRalphStick Nodes is *the best* simple animation app available on theAndroid market! It's a great tool for learning animation, even in aschool setting for students or newbies. At the same time, StickNodes is robust enough and powerful enough for even the mostskilled animator to really showcase their skills! Thank you fortrying out Stick Nodes! Leave any questions/comments below or onthe main Stick Nodes website! Common questions are already answeredon the FAQ page here http://sticknodes.com/faqs/
1

Grand Theft Auto V: The Manual 5.0.18 APK
Rockstar Games
1
GTAV: The Manual is the official manual app for Grand Theft Auto V.Contains over 100 pages covering everything from Game Controls, andFeatures to a tour through the local neighborhoods and activitiesacross Los Santos and Blaine County - plus a special interactiveversion of the game map to zoom in and explore. Developed by seriescreators Rockstar North, Grand Theft Auto V is available worldwidefor PlayStation®4, PlayStation®3, Xbox One®, Xbox 360® and PC. Setin the biggest, most dynamic and most diverse open world evercreated, Grand Theft Auto V blends storytelling and gameplay in newways as players repeatedly jump in and out of the lives of thegame’s three lead characters. When a young street hustler, aretired bank robber and a terrifying psychopath find themselvesentangled with some of the most frightening and deranged elementsof the criminal underworld, the U.S. government and theentertainment industry, they must pull off a series of dangerousheists to survive in a ruthless city in which they can trustnobody, least of all each other. All the classic hallmarks of thegroundbreaking series return, including incredible attention todetail and Grand Theft Auto’s darkly humorous take on modernculture. Grand Theft Auto V also comes with Grand Theft AutoOnline, the dynamic and ever-evolving Grand Theft Auto universe formultiple players. With the expansive game world and fluid mechanicsof Grand Theft Auto V as a foundation, Grand Theft Auto Onlineexpands and evolves with regular content updates created byRockstar Games and the Grand Theft Auto community. With assistancefrom characters from the story of Grand Theft Auto V, players risethrough the criminal ranks by banding together with friends tocomplete Jobs for cash, purchase properties, vehicles and characterupgrades, compete in traditional competitive modes such asDeathmatches or Races by land, air or sea, or create your owncontent to play and share with the Grand Theft Auto community. Tofind out more about GTAV, visit http://www.rockstargames.com/VWatch GTAV trailers, gameplay videos and more at:http://www.rockstargames.com/V/videos
1

Google Play Games APK
Google LLC
1
Games are more fun with the Google Play Games app. We'll help youfind your next favorite game – from action to puzzles. And with"Instant play," many games require no installation. Really. Saveyour progress and track your achievements as you level up. Plus,you can pick up where you left off from any device. KEY FEATURES •Instant play: There’s no installation needed – look for the"Instant play" button to instantly play full games. • Built-inGoogle games: Play Solitaire, Minesweeper, Snake, PAC-MAN, Cricket,and Whirlybird – even when you’re offline. • Save your progress:Your progress is automatically saved to the cloud when you see"Progress saved by Play Games." • Gamer profile: Create a customgamer ID, unlock achievements, earn XP, and level up. • Gameplayrecording: Easily record and share your best gameplay moments.
1